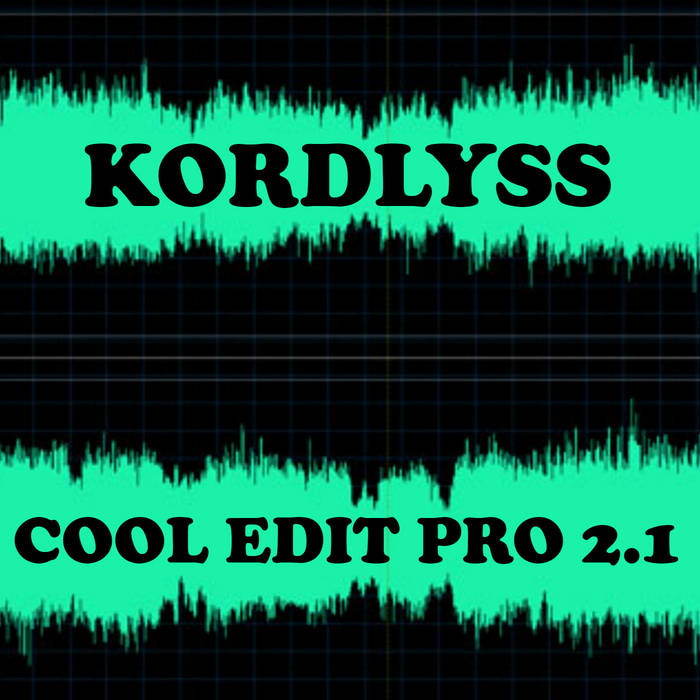 Cool Edit Pro 2.1, the latest release by nerdcore rapper Kordlyss, shows that this long-time veteran of the nerdcore scene still has bars and skill to spare. However, Most of the tracks on the album are plagued with cliché nerdcore campiness— or is that intentional? He quickly proves his skill, wit, and incredible potential. Unfortunately, the effort as a whole comes off as somewhat uninspired compared to his earlier works.

Kordlyss, a Connecticut native now living in Boston, MA, has been active in the nerdcore scene since 2012. He has released eight albums and two EPs in his career. He was most active from 2012 through 2015, with only three releases since then, the other two being the A Very Christmas EP and the album Jackson Polack in 2018.

Self-deprecation and subverting the traditional duties of an independent artist are his M.O. One look at his website tells you that Kordlyss is not one for talking himself up, or about himself at all. The only other bits of personal information I could get is that he’s a theater major, and credits Shakespeare and Edward Albee for his love of English. He’s one to let his music do the talking for him.

Having been active in the scene for many years, Kordlyss has been able to work with several other artists, such as Dan Bull, Cecshi, and Vincent EL. He has also collaborated on a side project with Vincent EL called ill_eden. A veteran of the second, third, and fourth editions of the Nerdcore Vocalist- Producer Challenge, long-time fans of the competition should be very familiar with his voice and lyrical style.

For Cool Edit Pro 2.1, Kordlyss seems to be taking more of a hobbyist approach to his latest album. While not necessarily a bad thing, the differences between this album and his previous works are evident. I feel there was likely a time he possessed a greater hunger for greatness, and for whatever reason— maybe life got in the way, his priorities changed … whatever it may be, his approach to music feels different now.

Kordlyss told me about the album, “the overall gist of this release was to have some fun recording on a shoestring budget.” He also told me the name of the album is a tribute to Cool Edit Pro, the software all of his albums are recorded on. His devil-may-care approach to this album is assuredly a liberating thing for him. To be able to create freely without expectation is admirable, although this approach can be a double-edged sword. While I can appreciate his ideology of not taking things, and especially himself, too seriously, I think some extra care would have helped the album as a whole.

Typical, on the surface

My first impressions of the album’s 12 tracks weren’t good ones. Typical nerdcore beats, cadence, subject matter … all par-for-the-course stuff. I don’t expect every album I hear to be some avant-garde masterpiece. What I do hope for is to hear something that pushes its chosen genre forward in some way. If you only give Cool Edit Pro 2.1 a cursory glance, you’ll never find that. The album does itself a disservice, being that many would likely not dig a little deeper to find the good that exists.

Some moments give me what I’m looking for. Kordlyss is unquestionably at his best on his In The Finished Basement tracks. There are two parts, and they are long— 21 and 15 minutes, respectively. “I recently bought a new house and had the realization I’ve never fully had the freedom to home-record at full volume before. So, to celebrate that, I spent two sequential weekends writing stream of consciousness rap verses,” he explained. If you can get through the tracks, you’ll find the best beats in the whole album and an adventure that feels like a front-to-back journey through a rhyme journal. He does with his bars what Sonic Youth does with guitars, and just lets it happen.

Songs like Remix (Re(mix)) let his satirical side shine through. While arguing the point of excessive remix songs in popular music is more relevant to the early 2000’s, it’s still a fun song. Hits is a textbook example of his ability to knock down the concept of ego. For me, that seems to be the overall tone of the album— “We’re just having some fun here, don’t take it too seriously.” I get the feeling when I hear tracks like Drubs, and BDE that he was just phoning it in at times.

One thing you can never take away from Kordlyss is his mastery of the English language. He’s an MC that can build rhymes in his sleep with surgeon-level skill. In several songs, there is often a slow buildup to the juiciest bars in each track, and I fear that many wouldn’t give his songs the time required to get to them. What lacks in Cool Edit Pro 2.1 is a passion for polish.

If I’ve learned anything in listening to this album in-depth and talking to the man directly, it’s that this is largely intentional. He’s not looking to be viewed as some transcendent rap god. His music is more hobby than a career, and at this point, he just has fun tinkering with words, which is his real passion. Kordlyss is a great rapper, but not necessarily looking for greatness. If he’s happy, then who am I to criticize?