Dual Core – All the Things 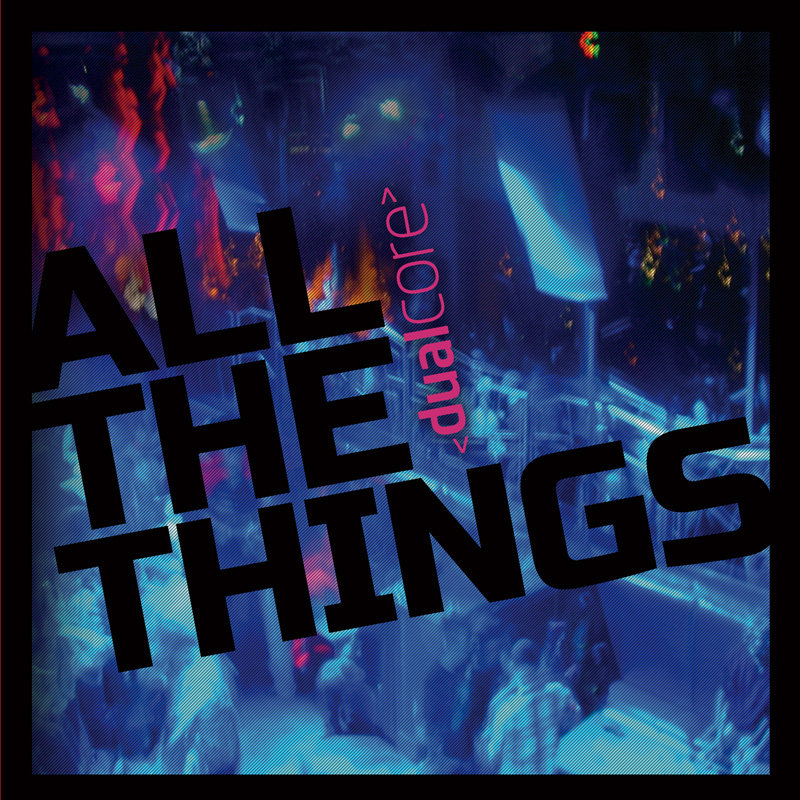 Like yo dawg, inception is profound; we heard you like rap, we came back with a better sound.

When Dual Core emerged in the scene in 2007, they were refreshing and interesting with their initial style. With each subsequent album, they grew and evolved with rhymes that sentimentally connected with the computer geek/nerd crowd and storytelling that ranged from positive to cautionary tales on how technology would eventually destroy us. They grew and grew and grew until they released the album that took them 3 years to make but 5 years to master. “All the Things”.

The album follows the ever developing formula that Dual Core has been developing throughout its albums. Braggadocio songs about hacking/gaming mixed in with posse cuts with nerdcore’s hardest hitting emcees and storytelling songs that range from optimistic to cautionary. int80 raps like a seasoned boom bap pro over the album’s 13 tracks while c64 provides modernized boom bap production with clever usage of samples and original production, mixed into the package are breakdowns which expand the song and double as beautiful transitions between songs.

While past Dual Core albums entertain, those feel like stepping stones to the duo’s desire to make a classic album. What makes this a classic is the variety of the tracks combined with the consistent quality of them. One moment you got a bunch of hard edged tracks while at another given moment, you get a somber, reflective track that connects with your soul and at rare moments, you get a track that’s geeky in itself. A good album mixes variety with consistency and that’s what “All the Things” does here.

Of course, no nerdcore album can be complete without the rhymes and that’s what int80 delivers here, rhymes that could double as his life story. On “Back to Me”, he talks about his rise to stardom starting from a person who doubted himself to a person who is confident about himself, all while laying down small tidbits such as his first performances to the best moments of his career at the time. “Running” has him talking about the hip-hop acts that inspired him like Jedi Mind Tricks, Non-Phixon and Pharoahe Monch as well as describe the inspiration that caused him to mix geek topics with hip hop, the same could go for the guests on the song.

“Farewell” is a cautionary tale of how technology could help change the world but ultimately harm it if things are done wrong. Something that reflects well in modern times and shows int80 as a person who is more aware of technology and the subsequent negatives than the normal average person. “No Time” is a reflective song about how people shouldn’t waste their time and just do the things that they’re supposed to do, a trademark of Dual Core and their ability to both inspire and make the listener aware of things that they normally wouldn’t be aware about.

Of course, “All the Things” wouldn’t be complete without some epic songs. The title track goes all out with int80 rhyming as it it was the last day on Earth and because of that, he packs in a lot of good lines; my favorite has to be “They killed virus writers that we mention; but instead they ascended to the VX heavens.”; a line that most people would miss but elevates the song to an entirely new level. And there’s also “Go Figure” which is a posse cut over a beat that many rappers would kill for; each rapper excels and succeeds talking about the nerd life and they turn out to be harder than the hardest rapper out there.

There are some less accessible tracks on the album like “The One” and “Last Writes” that don’t really fit with the vibe of the album but still work as songs. “The One” has good lyrics but a beat that could of used some work and “Last Writes” has no problems but appeals to the original geek crowd; music fans may need some time to process it but if your computer had MS-DOS on it than “Last Writes” will hook you instantly.

“Went from making something that I thought would get us laughed at; to outshining every other Cincinnati rap act.”

Dual Core – Back to Me

Overall… “All the Things” is an album that showcases the growth of a duo who met on an online forum who just wanted to rep the nerdcore life but found themselves with an album that propelled them to legend status and ultimately, cemented Dual Core as a go-to nerdcore duo. The album has high consistency, engaging lyrics and even a lot of depth. It is a ride that you’ll want to sit back and enjoy and it is something that I think warrants you giving them your hard earned money. c64 is a dope producer, int80 is a dope rapper and together they formed Dual Core, a dope group which brought you this dope album. It isn’t perfect and it could of been refined a little bit more but then again, the final product is enjoyable and engaging and in the end, isn’t that what matters?