MC Frontalot – Net Split or, the Fathomless Heartbreak of Online Itself 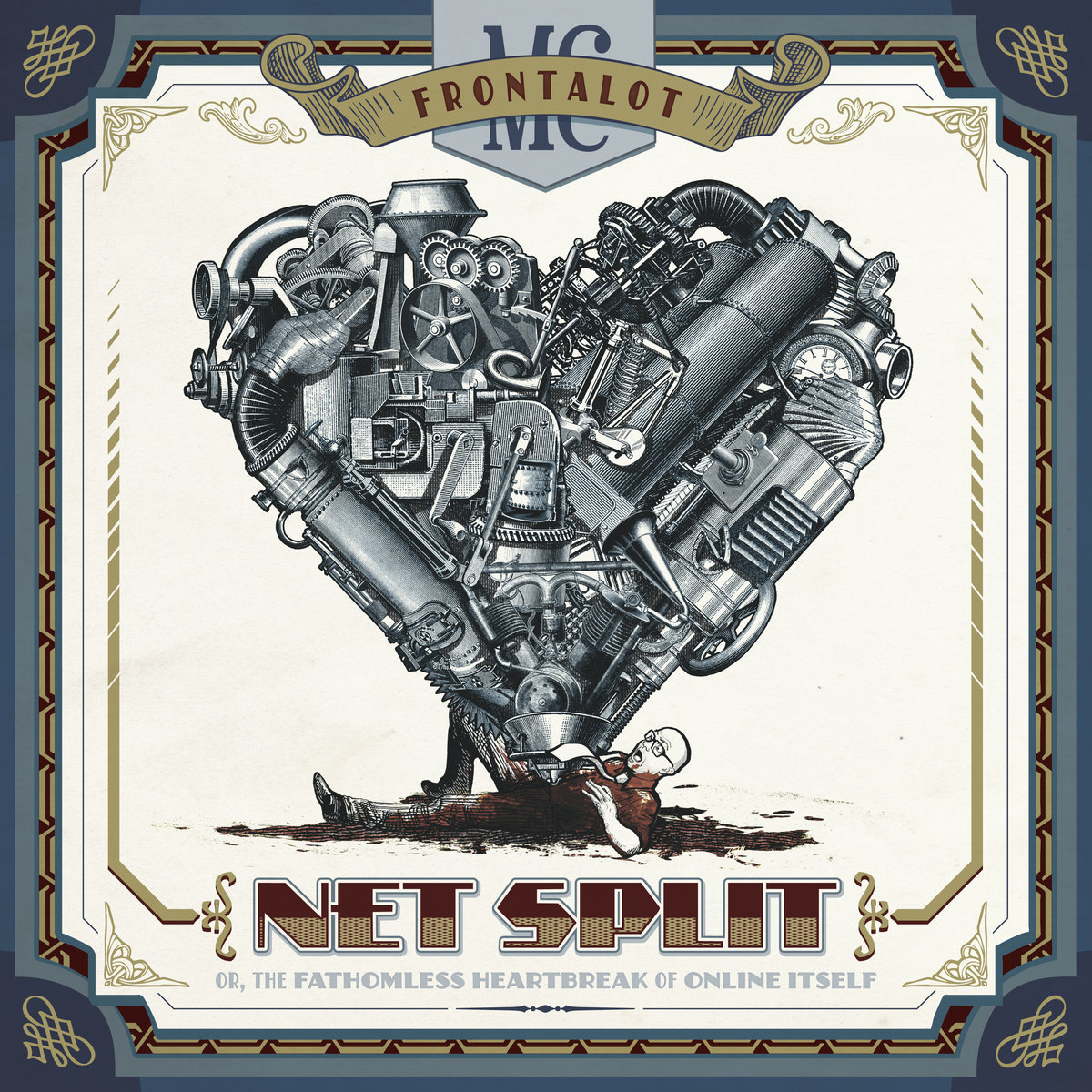 Sometimes I look back on our earliest love affairs/I had so many hairs, and you were made of everyone everywhere, or so I imagined…

Early in history, the internet was a friendly place where people could interact and communicate based on interests or hobbies that they shared. It was like that for many years until the invention of social media and the consolidation of internet power threatened the balance and ultimately turned it into a nightmare, like if you were stuck in middle school for life. Many early internet users have fond memories of the golden age of the internet, MC Frontalot included, who uses those memories to compare the internet of today and contrast what makes it so bad, all while telling a story about heartbreak, angst and isolation titled “Net Split or, the Fathomless Heartbreak of Online Itself”.

The idea of the album is interesting, what if you made a nerdcore album about how bad the internet is. MC Frontalot has made albums with a distinct sound and style but never has he attempted to make an album with an actual story/concept behind it and one might be considered his first attempt. The idea he has for the songs are wonderful, a majority of the songs are either electronic sounds mixed in with organic sounds or dark, menacing sounds that put Frontalot in positions where he’s never been before. The lyrics he laces are filled with topics that are taboo to cover in nerdcore but he covers them well, hearing MC Frontalot talk about memes in “Memes Are Stupid (feat. int80)” or talk about internet comments in “Never Read the Comments” is like hearing a person pour out his soul to an audience who is willing to listen. Both songs detail the pitfalls of what the internet has become and MC Frontalot puts himself in the position of somebody who is disgusted with what the internet has become and someone who will not take it anymore but has to due to the powers that be.

You get despised and disparaged. Is this normal? Let it go, A single toe dipped in the fester-hole subjects to undertow/as if to know your worth itself became debatable, as if anything could be wonderful enough to be unhateable.

Which brings up a recurring theme with the album, the deep lyricism. MC Frontalot on this album sounds like an entirely different emcee than his prior projects. Putting words, syllables, metaphors and context in a way that sounds like a professional emcee. Throughout the albums original tracks, he talks about things like sexism, victimism, online addiction and how the internet devolved into clickbait and nonsense and when he does talk about it, he has enough knowledge to know what he’s saying and deliver it in a way that’ll make you understand what he is saying. Whether you agree or disagree with him is up to you but you will admit that what he’s saying is factually sound and lyrically deep.

The concept is interesting, the songs about the concept is good and the story he’s penned is exceptional. The main fault with the album is that he doesn’t go all in with the concept, like he feels the need to include some nerdy songs or some of his classics done in an unplugged fashion. It leaves the album feeling empty when it could of gone to exceptional heights elevating the nerdcore platform that he himself created to a status that would of transcended art itself. The unplugged versions “Pr0n S0ng” and “I Hate Your Blog” doesn’t fit in with the overall theme of the album and at times, contradict the theme of the album while “Bad Nerd” is the only original song that feels out of place due to the lyrics not matching with everything else said before. I’m not saying he should of changed anything about the album, I’m saying he should of tried a little bit harder.

At 11 songs and 1 skit, it’s a short ride that could of been a bit more cohesive and a bit more detailed but for what it is, it’s good. The songs that do focus on the subject hit their mark and excel with admirable results while the songs that miss bring down the project and make you wish MC Frontalot would of done more for it. Still, if you need inspiration for your next nerdcore project or are a fan of MC Frontalot or even a fan of nerdcore in general than this’ll satisfy you.

It does leave me wondering if anybody can make a nerdcore album that transcends the genre. There are a lot of nerdy themes that anybody can take and anybody can expand on and build upon until they have an album that even music fans or Pitchfork will like. If we had an album like that then well, nerdcore would be recognized; for better or worse, I do not know.