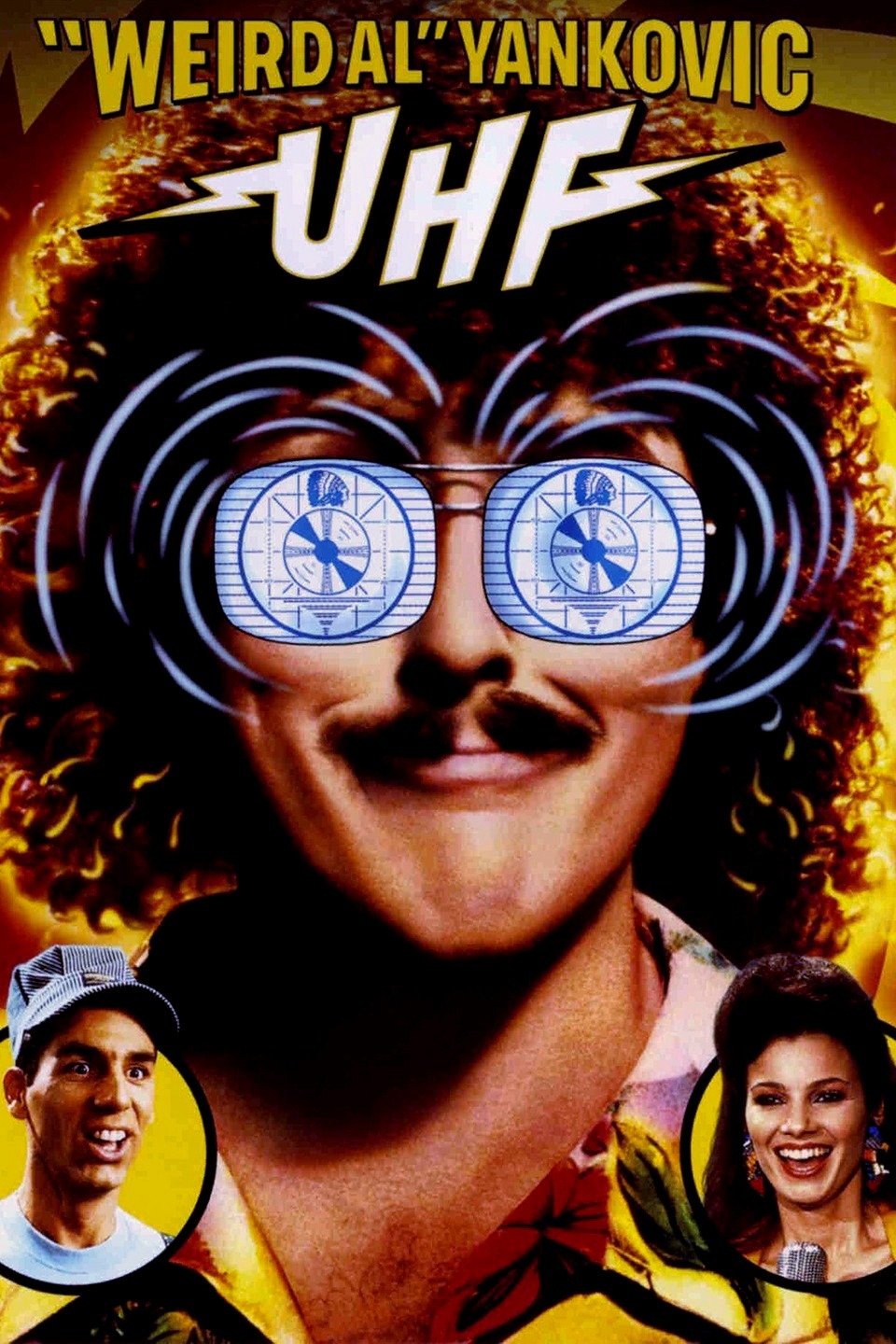 Alfred “Weird Al” Yankovic is one of the few people who has made their own image, their own brand of comedy, is known and admired by everyone, has gotten several Grammys, has several popular parody songs and has managed to remain successful to this date. All based on being weird, being funny and being able to play the accordion. His career has always been on the upside, even though his popularity in the past ranged from very positive to somewhat negative and in 1989, the time was right for him to release his lone written by/starring role feature film extravaganza UHF. A movie inspired by the likes of “Airplane!”, “Mad Magazine” at it’s prime and “Weird Al”‘s mixture between light-hearted, absurdist and sometimes dark humor.

The history of the film is weird in itself… The making of the movie went smoothly and test audiences enjoyed it, “Weird Al” described the ratings as being “better than RoboCop” but when the film was released into theaters, it bombed badly, recouping only a small amount of money from the large budget it had been assigned. While many fingers were pointed at the marketing/promotional campaign and at the film itself, there is no way to truly pinpoint the failure of the film in theaters as the film itself found more popularity in the home video market where it achieved cult status and subsequently, as more people watched the film; more strived to emulate it’s style.

The film itself has a limited plot with most of the running time being taken up by gags/jokes/parodies and some limited satire involving characters who are either dynamic and bright or dim witted to the point where they don’t really realize the world around them or even how their actions contribute to the plot of the film to the point of comedy itself and it does this by starting off with a very weird Indiana Jones parody. Within the first few minutes, you get a taste of “Weird Al”‘s humor style, how he plays himself (George Newman) in the film and how the film is going to turn out and trust me, if you’re a fan of prop humor, sketches and absurdity than you’re going to love this film.

The plot that is there only serves as a segue into the various sketches and jokes that are littered throughout, acted out by characters who have such dynamic personalities that you’d almost mistake the film for one giant SNL episode. While there are stakes, they are very limited and only serve to fuel the incompetent characters whose humor lies not with the way they’re treated but with the ignorance that they have that contrasts with the world that “Weird Al” has built for UHF. As everybody knows, “Weird Al” is a kid at heart and because of that, he manages to successfully make a cartoony world in a way that other films can’t. He doesn’t try too hard, he doesn’t even have to try, he just does it.

Sketches in the film range from clever to nonsensical even going as far as being super blatant. While there is some commentary about the TV industry at the time, it takes a back seat to the humor which in many cases will make you laugh out loud; you never know what you’re going to get with the sketches, this is a “throw stuff on the wall and see what sticks” and a lot of it does stick. It’s not concerned with making the perfect joke, it’s just making jokes and that’s what comedy films are supposed to do nowadays, make jokes at the expense of everything around you.

While people may bemoan at the lack of a plot and a lack of character development, the characters that are there are vivid and brightly colorful. Because of this, they enhance the sketches that they’re in and often add something that you never knew worked within the confines of the sketch. In plot related scenes, they’re also fun to watch as well and help balance the serious stuff with the absurdist bent that the film has. This is not a film to be taken seriously, this is a film that you either laugh at or laugh with.

This film is an influence in the comedy/parody film scene as evident by the amount of films that tried to duplicate its style or were influenced by its style. “The Onion Movie” for example was a film in the same vein as “UHF”, limited plot, lots of sketches and forced plot progression almost bordering on parody but that movie is an example of how you shouldn’t really make a film like “UHF” and that’s the thing. It’s hard to duplicate “Weird Al”‘s style for there can only be one of him, while there are numerous people doing parodies, there is only one who can take two Michael Jackson songs and make them about food. Sure, you can make a parody song and focus it on food but can you make it the same as “Weird Al”?, doubtful.

With the amount of effort that Weird Al put into the film, this film should have been a success but ended up bombing in the box office and managing to find cult film success in the home video market which leads me to my closing statement, films can be weird, films can break boundaries but there will always be people who will detest such films and do anything they can to stop them from being made. Luckily we live in the era where everybody can be as weird as “Weird Al” if they want but there will always be this opposition.