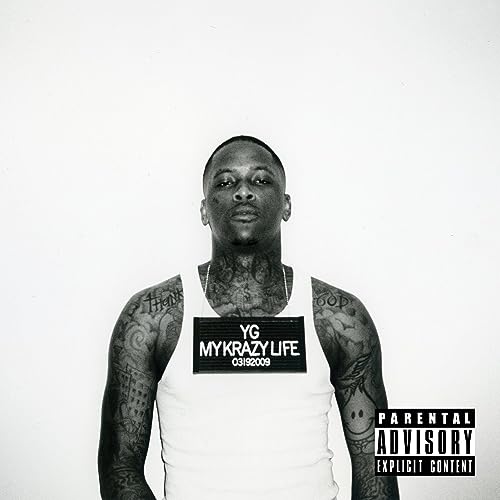 When YG first emerged in the scene, he was an authentic street hustler who just so happened to want to make club music, this was back when MySpace was a force to be reckoned with. As the years went by however, the raps got better, more street oriented and more connected to the harsh realities of Compton, California; a city that has seen its fair share of ups and downs throughout the years. In the lead up to My Krazy Life. He released 3 mixtapes, specifically 2 volumes of his “Just Re Up’d” mixtape series where the world was introduced to the melodic but sparse sounds of DJ Mustard which was a double edged sword that combined synthy production with streetwise edge. Originally it was going to be titled “I’m From Bompton” but as time went on, he realized that he needed to make an album that had a core, that truly connected with Compton and henceforth, decided to do a lot of studying and lyrical refining and the result is YG’s most successful album to date. “My Krazy Life”.

For his debut studio album… YG kept the formula that made him so successful, DJ Mustard beats over YG street raps but the formula is refined a huge amount. Following in the footsteps of Kendrick Lamar’s “Good Kid, M.A.D.D. City”, the lyrics describe the life of a gangbanger who knows that he’s stuck in a terrible lifestyle but oddly enough enjoys the lifestyle to several extents; those lyrics are backed up by some menacing DJ Mustard production that is sparse but oddly melodic and catchy at the same time. While DJ Mustard doesn’t produce the entirety of the album, his production powers a lot of the tracks and those tracks can be considered memorable classics of sorts. YG successfully realized that with an album, he needs to step it up a bit.

For a 2 interlude/12 track album, there’s barely any filler. There are tracks that sound different but for the most part, this is a classic album with consistency and street edge that’s oddly radio friendly. I remember when YG’s “My Hitta”, “Who Do You Love (ft. Drake)” and “Left, Right” were played frequently on the radio and I mean frequently; in the album, they work within the context of the story that plays out but on their own, they truly stand out. That’s the example I use to describe all of these tracks, if all of them were taken out of the album and released as singles then each one of them would of made an impact similar to Michael Jackson when he released “Thriller” and “Bad”. A musician realizes when he has a good song but lightning in a bottle is harder to come by and this entire album, is lightning in a bottle.

It’s easy to see why this album was such a success, it was released during a time where Kendrick Lamar redefined the west coast sound and YG basically made an album that redefined what was possible with gangsta rap, the west coast’s bread and butter. When you got lines like, for example… “‘Hamad threw a right, duck, hit him with the left, bop-bop!/Two to the chin, bop! One to the chest/One to the ribs, the haymaker didn’t connect/Dropped him but didn’t stomp him cause that’s disrespect”, that describe the level of gangbanging detail that YG put into this album to transport you to the slums of Compton, you’ve got what could possibly be called the second coming of gangsta rap.

However, the albums released after this didn’t make much of an impact. While “Still Brazy” was a good album, it’s sound didn’t click with much of an audience. (the video for the title track has 12M views on YouTube for example.) the album after that (Stay Dangerous) had a hit in the form of “Big Bank” but nothing else after the fact. (Suu Whoop had 31M views on YouTube, much less than Big Bank’s 100M+ views.) Then there’s “4REAL 4REAL” which was the same in that it had a hit song (Go Loko) and then the other songs went unnoticed like “In the Dark” for example. (whose video did less with 5M views.) What I’m trying to get is at “My Krazy Life” is such a rare feat that he was unable to top it leaving him to create club songs with gimmicks.

I believe that he’ll never be able to top “My Krazy Life”. It’s YG’s Magnum Opus… It describes the street life in such detail that you’ll feel like you’re there, on the streets afraid for your life but feeling oddly energized at the same time. While Compton life isn’t for everybody, you can listen to this album and feel just like YG did, on top of the world and ready to face anything that comes your way. This is the type of hype that the album provides. While YG hasn’t come up with anything that tops it, that shouldn’t stop you from having this album in your collection, it’s recommended listening for not only old gangsta rap heads, but for somebody who wants to understand what the new school is all about.