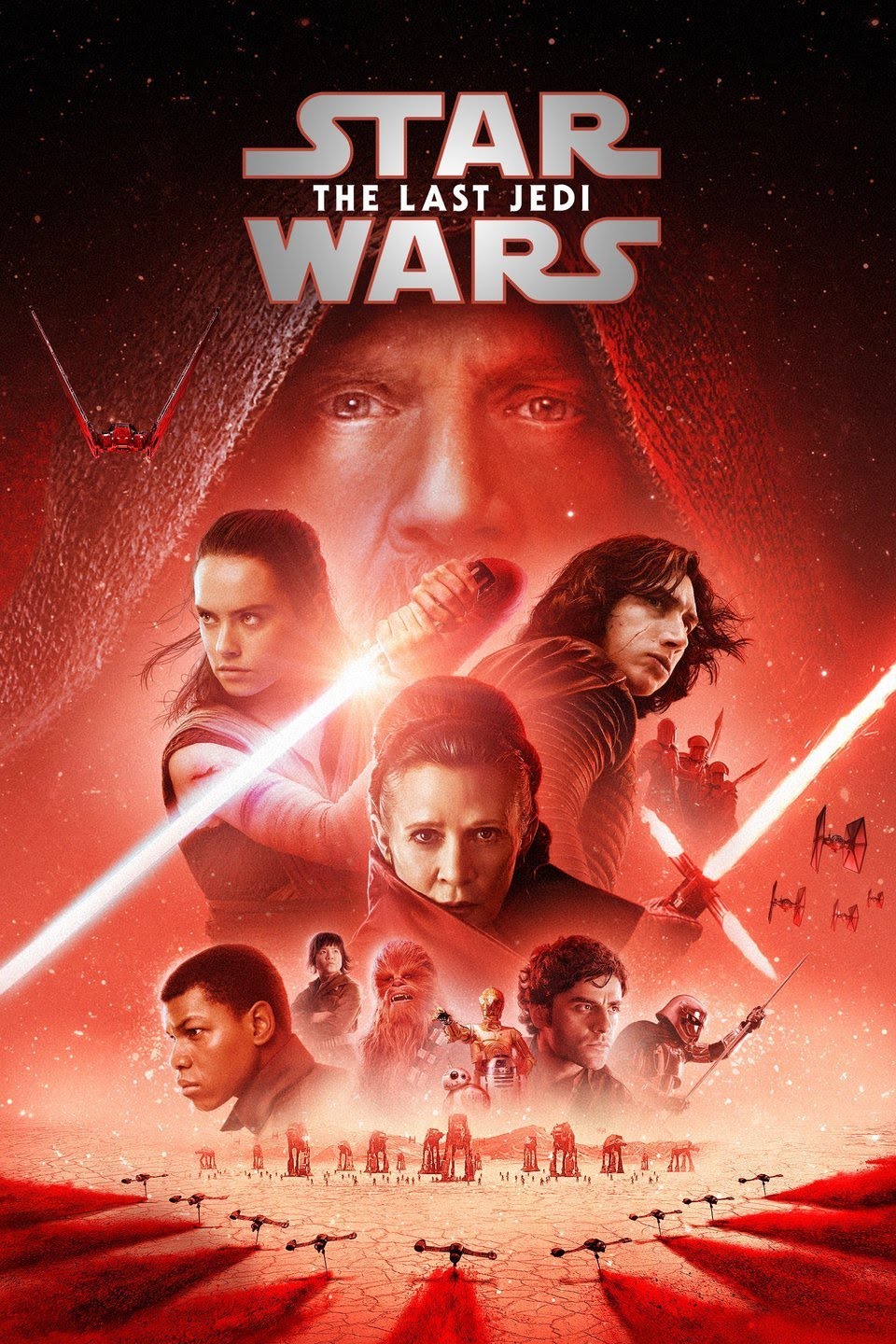 Before Lucas sold Star Wars to Disney, there were two trilogies that formulated a story. The prequel trilogy and the original trilogy. Both trilogies have their fans and haters but the overall arch was clear, it was the story of how the Sith came to power and how the Jedi came back in full effect. It was a balance that could only be understood through one’s knowing of Asian philosophy and knowledge of the techniques of inner peace. While it may of been a family story on the surface, it was a story of how good and evil needed to co-exist otherwise the evil would eliminate the good and so on.

Those elements along with the mythology of the universe would make Star Wars both acclaimed and disdained at the same time, so much so that when Lucas was looking to sell it’s empire that it spent so much time building, Disney was one of it’s interested buyers and a deal was eventually made to sell Lucasfilm to Disney. When that happened, hope emerged that Disney would milk the properties it bought from Lucasfilm, specifically Star Wars. People were excited because Disney was a fresh face to Star Wars unlike Lucas which many people have critiqued his direction and his style for the prequel trilogies assumed flaws.

I remember when a lot of people attended the premiere of “The Force Awakens” in their local theater (remember those things, good times?) and they just cheered and enjoyed the film for what it was, a Star Wars renaissance despite the fact that the film was “A New Hope” without many of the film’s memorable ticks and quirks that made it such a success in the first place.

I admit, I was weary of “The Last Jedi” when it came out because I thought it would be a remake of “The Empire Strikes Back” without anything that made it classic. I watched it 7 times and while I didn’t like it at the time, critics hailed it as one of the best films of 2017. This dislike seeped into the Star Wars fandom and it was turned into hatrid by Russian hackers looking to sow discord into the United States, turning what would of been just another Star Wars film into discussion on whether or not our society is as eirtight as people thought it was.

There was speculation on whether or not the last film would follow the Last Jedi or throw it out entirely and when “The Rise of Skywalker” came out, the film heavily retconned elements from “The Last Jedi”. There is much discussion on this to whether the Star Wars fandom influenced such changes to whether Disney wanted a more family friendly approach to the last flick, especially considering what “Dual of the Fates” would of been had it been made and not been the subject of Disney’s tinkering/playing it safe.

In the end, the sequel trilogy became an example of what happens when you mess around with the Star Wars formula too much and keep tinkering with it to the point where you don’t know where you started and find yourself at an ending which has no relevance to what happened. We did get one good film out of it and today, I’ll be reviewing that film; not to prove a point but to reveal it’s best qualities.

When the film was released, Rian Johnson (who helms the directors chair) was a relatively unknown director with a few films in his belt that were good but not reflective of his overall ability. I’ve learned from watching the RedLetterMedia review of this film and Wikipedia that he ditched the script and went full on with the creative direction of this film, even creating his own storyboards. While many derided this as “unnecessary risk taking”, Rian was essentially doing what every Star Wars fan director had done since the dawn of Star Wars, and that was make a version of Star Wars that was his but was still faithful to what Star Wars had made for itself.

Because of Rian Johnson’s direction, the film itself is different from “The Force Awakens” and “The Rise of Skywalker” in that it doesn’t follow plot conventions established in previous films. Instead it takes its own path combining elements of ancient samurai films, adventure epics and the morality of many science fiction series to create what is essentially a different type of Star Wars film but still retains several elements to be considered Star Wars.

For example, the film probes deep into the mythology that makes Star Wars what it is; family narratives, the titular force, teachings that were established in the films before it are all in question as the film establishes a progressive direction. While Lucas may have established the force as a genetic thing, Rian establishes the force as an everybody thing by getting rid of hierarchies and casting the Jedi as a “religion that sought to control the force”. This in turn lays the groundwork for what could be some of the best storytelling that Star Wars has ever found itself with.

The groundwork gives Luke Skywalker, Rey, Poe, Finn, Leia and some newcomers the resolve and character necessary to guide themselves through the plot and for some, the ability to provide some darn good acting and also gives the subplots (which form to make one big story) ample opportunities to lay political commentary and mythology building galore.

If “A New Hope” was inspired by the Vietnam Army’s resistance to an oppressive United States of America invading them then “The Last Jedi” is inspired by the Trumpism of America and their ongoing fight against progress and progressivism. By establishing “The New Order” as money-hogging, war-mongering elitists, it adds more to the good and evil struggle that have traditionally been the focus of Star Wars stories and by making the Luke and Rey’s story an allegory to abiding to a broken system that lead to continual downfalls and breaking from that broken system to not only finding independence, but also finding legacy from being the hero that everybody needed; it gives the film weight that a Star Wars film has never had before.

The film subverts traditional norms and twists through clever editing, filming and plot diversion. Following in the footsteps of “The Empire Strikes Back” but not outright duplicating it, this film gives you the impression that something traditional and expected is going to happen before revealing the curtain in a way that not only builds upon the plot but builds more of the world. Stereotypes are thrown out the window for a more realistic viewpoint; not every mission is a success, some people don’t see what’s at stake, not everybody is going to make it out alive and there’s no such thing as black and white without grey in the middle.

Speaking of which, Ben’s (Kylo Ren) role in this is less Darth Vader and more Count Dooku as he acts in a way that is less evil and more altruistic. His relationship with Snoke is less of a friendship and more of an abusive relationship that shows the inner conflict that Ben faces throughout the film, an inner conflict that has political and psychological intentions. The ambiguous nature works well with the groundwork of the film to provide the character with reason for thought, laying open an invitation to the mind of Ben, making him less evil and more of a person who wants to provide change but in a different way than Rei, leaving not to good vs. evil, but two different sides who have different thoughts that they can’t agree with.

Even though Leia is incapacitated for most of the film, her position as the beacon of hope still shines well through her brief scenes, showing that no matter how bad the situation might get, there’s always going to be something out there that’ll turn the tides towards progress whether it’s through hope that Ben might still be in there or through her bold leadership; which leads us to the film’s drive, that being a lack of hope or changing fate.

The resistance is put through some challenging situations after several battles and lightsaber fights that remind you of hallmarks of Star Wars’ films of yore giving new definition to the phrase “we won the battle but not the war”, while you may be distracted by the action on screen, the film weaves realism into said war by introducing cocky decisions, sacrifices, consequences and even dire situations into the film; several to say the least. The battle scenes are well choreographed and have several impressive set pieces that are sure to excite fans of series and even though nobody truly wins the battle or the war, several everlasting moments are made; some which are controversial but have good heart in them. (Finn kissing Rose for example).

The film’s core intention is laid in it’s progressive roots; it’s not about good defeating evil or finding hope in one person or even surviving to see another day. It is finding hope where you least expect it, embracing said hope and defining the future with said hope with Luke’s story is possibly the best example of this. This film doesn’t put the fate of the galaxy onto one person, it puts it into the Resistance and it doesn’t give the force to one person, it gives the force to everybody. It’s like Jesus opening the gates of heaven to everybody while Isrealites want it only for themselves, there are some people who will fight to keep it the way it is but ultimately it’s the most logical and right thing to do.

Some things may hold the film back like stilted dialog and Disney’s interference to make it more family friendly and accessible but this is a film that’s more than Star Wars, that’s more than space fantasy, that’s more than an adventure. It is a political and theological statement that suggests that there’s more to life than what’s out there, that there’s a better future for everyone and all it takes is some effort to move on from the past and move forward.

This film’s not for everyone, it’s not for the old fans who want family lineage or a simplified story or even lightsaber battles and space fights galore, it’s not for the casual fan who may not understand everything that is going on. It’s for the true fan who understand what Star Wars truly meant and what Star Wars means for all of us right now. “A New Hope” was more than just good and evil fighting it out and “The Last Jedi” is more than what a RedLetterMedia review has to say about it. It was the future of Star Wars before “The Rise of Skywalker” came out and despite it’s naysayers who say that it’s the worst film ever, it’s still a success in filmmaking because it took risks while staying true to its roots. That alone is what makes the film and it’s something that Rian Johnson should be proud of. Screw the naysayers.