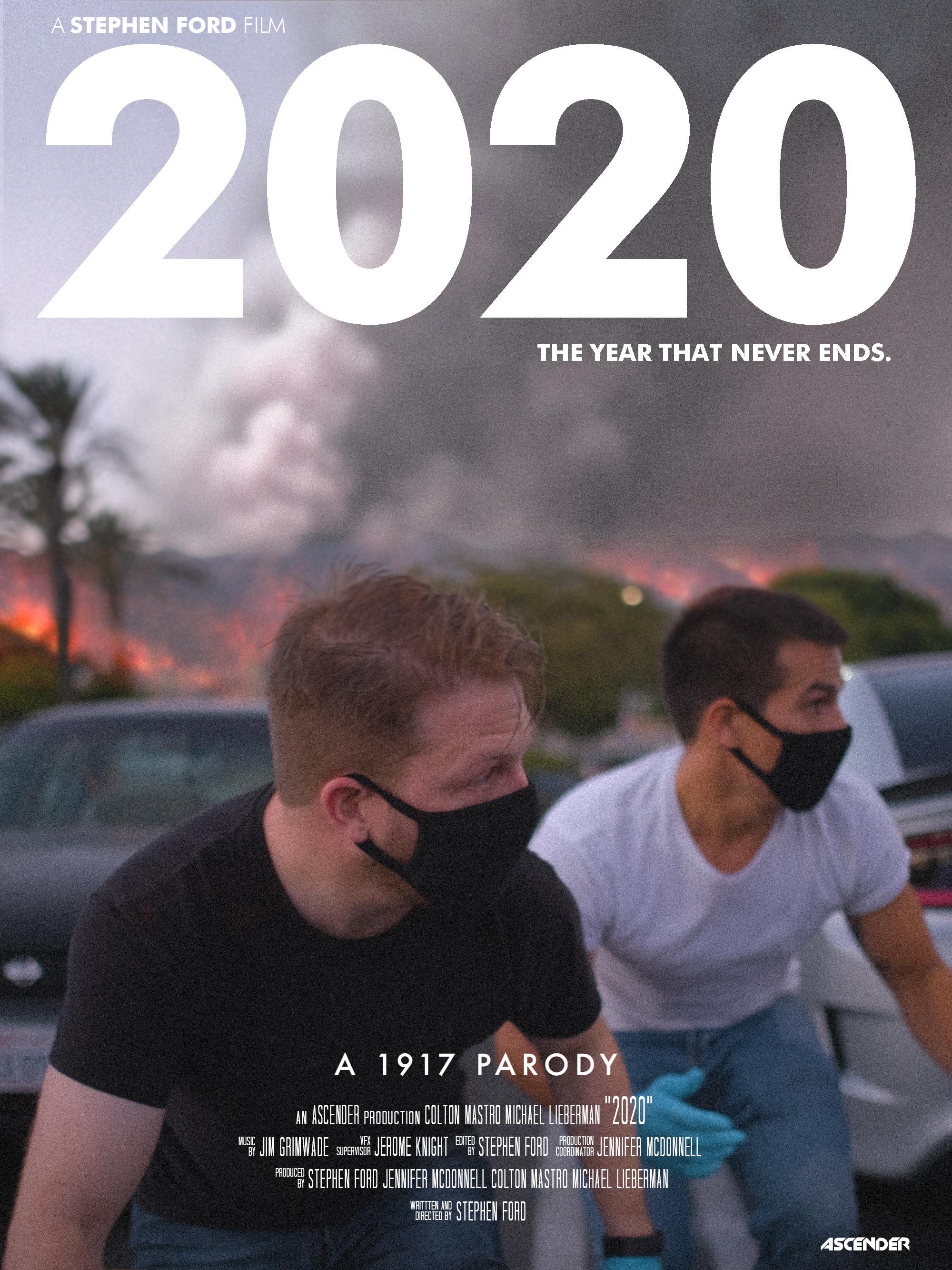 2020 has been a tumultuous year that has been filled with a lot of downs and very few ups. It has been a year where mother nature wrecked havoc on Earth, where COVID-19 wreaked havoc on society. and people rose up to protest the social norms that were once acceptable. To put it shortly, 2020 is a bummer but that doesn’t mean there can’t be some fun to be found.

Directed by Stephen Ford, 2020 is a short film 3 months in the making that pokes fun of 2020 while serving as a love letter to the film 1917. Shot in Los Angeles, the film takes the premise of 1917 and applies it to the modern times putting a unique lens on life in modern day times where food is delivered to you in a snap and social media has become the communication norm. By doing that, the film sets up a platform for it to inject some humor into what has been a drab year making fun of almost everything in its path, playing out as half slice-of-life, half comedy routine.

The film is shot in two takes much like 1917 and to put it shortly, the execution is nicely done. Taking advantage of the surroundings in front of them, they utilize the environment to make references of everything that 2020 has so far while injecting character and life into what is supposed to be a parody. It helps to make the film insanely replayable as we’re not just watching a mere 1917 parody but a short film about two people who just so happen to live normal lives in a world that just happens to be overdramatic.

Many of the jokes and humorous situations never feel stilted or forced mainly due to the film insistence to play it mostly straight while letting the humor come from the environment of the surroundings of the area. As we’re watching these two people over dramatize their journey, the realistic sights of 2020 provide a platform of which to provide humorous commentary whether it’s the fires in the distance of people just being people. It not only gives them an opportunity for a joke but gives organic nuance to a world that might as well be real. It’s a fresh take that most people who are looking to get into humor and/or filmmaking should really take notes on.

The dialog is exceptional as the actors here take a script and make it both lifelike and funny. The way they deliver their lines stays true to 1917 while leaving room for themselves to inject color and detail. It makes the multiple jokes and the multiple situations in the film work even if some of them are over the top, watching and listening to them react to objects or situations around them is what makes the film exceptionally enjoyable, it’s as if they know they’re in a film but they know that the film around them reflects real life and so they use said liberty to make said performance feel more real. It’s a testament to not only the magic of good script writing but also a testament to what happens when film magic is at work.

The camera angles, editing, color correction and intent all shine thanks to their hard work, dedication and film knowledge. You might be fooled into thinking it was a professional presentation thanks to the techniques used to create any kind of situation whether it’s the police being police or a natural situation that just happens to impede our heroes journey. It took a lot of meticulous planning just to make the film happen in a world where filmmaking had basically grinded to a halt from the set up work to the timing to even the presentation of the film; it makes the film feel more like a film and serves as what filmmakers are truly capable of when they put their brains to the fullest.

While the film is only 19 minutes long… This film is one of the best films of 2020 even though it wasn’t made by a major studio or given major film distribution. It’s the film that most filmmakers dream of doing and executing perfectly with humor that is natural and organic, acting that is both humorous and lifelike and filming that would rival Spielberg. It’s not only a well made 1917 parody but it shows what film could really be if 100% of every effort was placed into it. 2020 is something that sets the bar for other filmmakers and humorists and that alone says a lot about it.